If you’ve ever considered looking into someone’s criminal records, you’ve probably wondered if it’s an ok thing for you to be doing. People have been doing these kinds of searches for years at this point, and it’s quite possible that this thought never crossed some of their minds. If you’ve been wondering if it’s ethical for you to look into someone’s criminal record, that’s a good sign. It means that you have a strong conscience and that you’re probably quite likely to do the right thing in most circumstances, good job. Today we will be looking into this moral quandary and, hopefully, we can help guide you to a satisfactory conclusion.

To Search or Not to Search, That is the Question

Even the greatest thinkers the world has ever known have scratched their heads trying to figure out a system of ethics that can be used to break down what is and isn’t considered to be moral. Thousands of books have been published on the subject with thousands of authors. Even as far back as Plato and Aristotle, people have been trying to wrap their heads around morals and ethics.

It’s generally agreed upon, but not universally agreed upon, that one of the best moral frameworks that one can work off of is utilitarianism. The shortest explanation of this school of thought is that it asserts that the thing that is best for the largest number of people is the ethical choice, but it does get a lot more complicated than that if you do your research and really learn about the thoughts in this school.

On an individual level, this school of thought is often referred to as hedonism, and some forms of hedonism are as old as the idea of ethics. To answer the question today, we’re going to be looking at the ethical hedonism that was described by Jeremy Bentham. Bentham believed that the morality of any action that is done is determined by the amount of pain or pleasure that any action results in.

Bentham actually created a formula to help us with this, and that’s why we’re going to be focusing on his works. While there are other moral frameworks that we can use to explore this topic, Bentham’s formula provides us with the most concrete way to test the morality of looking into someone’s criminal record.

The formula that Bentham came up with is one with many names. Felicific Calculus, Hedonistic Calculus, and Utility Calculus are the three most commonly used names for the method that we will be running our actions through to find out if it’s ethical or not. The equation has seven criteria to test your action against, and at the end of it, you’ll have a good idea of where your action stands morally.

With these seven criteria in place, you may see that not all of them quite apply to the question at hand, and that’s ok. Hedonistic Calculus is designed to be able to handle even the most complex situations, and looking into someone’s criminal record isn’t exactly the most complex issue.

By looking through these criteria, we can extrapolate that you’d be ethically in the clear to look into someone’s criminal record, although it does depend on your intentions. For instance, if you’re looking into someone’s criminal record to make sure that you’re making a safe choice in allowing them into your home or to drive your kids around, you’re ethically fine. The action that you’re taking is one that will prevent pain from occurring and isn’t one that you’re taking to intentionally cause pain to another person.

On the other hand, if you’re just looking into someone’s criminal record to have some dirt on them, you wouldn’t be as ethically in the clear. Using someone’s criminal records in such a manner would definitely cause more pain than it would cause pleasure, and it would be intentionally causing pain. If that was your intention, you should probably just avoid making the search if you intend to stay morally in the clear.

What are Some Examples of Ethical Reasons to Look Into Someone’s Criminal Record?

There are a lot of ethical reasons why someone might want to look into someone else’s criminal record. At the end of the day, if you’re trying to find this information with safety in mind, you probably aren’t doing anything wrong. The information is considered public record, and because of that, it’s your right as an American to access it. Here are a few specific examples of when you would be perfectly ok to find this information:

Again, if safety is on your mind, you’re totally in the clear. You wouldn’t be finding this information with the intent of causing harm, so you have nothing to worry about from an ethical standpoint, and this kind of information is on the public record, so you also aren’t doing anything wrong from a legal standpoint.

How to Find Someone’s Criminal Record

Now that we’ve covered the ethical implications of looking into someone’s criminal record, let’s make sure that you know how to find the information that you’re looking for. It’s a lot easier than you may expect, but like most things in life, there is an easy way and a hard way.

The hard way is to use law enforcement databases to find someone’s criminal record. The information provided by these databases is spotty at best, and you need to compile the information yourself, meaning that this could be a painfully arduous process that could potentially take weeks to complete. 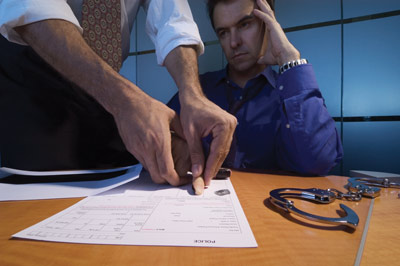 The easier way to go about this task is to simply use a personal background check service. Personal background check services exist with the sole intention of making this process a lot easier for its users. With this method, all you need to do is enter the required information in the proper fields and hit enter. Once you’ve done that, most of these services will be able to pull up the person in question’s criminal records from anywhere in the country instantly. This method is so easy and convenient that you could even do it on a short break at work.

There’s an old proverb that has survived the test of time for many years at this point, “conscience is the dog that can’t bite but never stops barking.” Making sure that you’re doing the right thing ethically can help you be sure that you’re keeping your conscience at bay, and that can help you sleep better at night. At the end of the day, we can’t tell you what is going to feel right or wrong for you, but we can help you with a little moral framework so you can come to your own conclusions. Whether you decide looking into someone’s criminal record or not is a good thing for you to do is up to you, but we can still give you a road map of how to find the information if you decide that it’s something that you’d be comfortable doing.